Bitten by the bug! 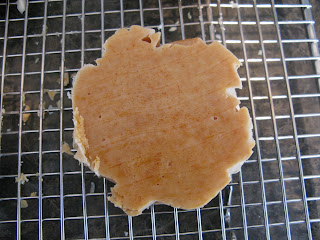 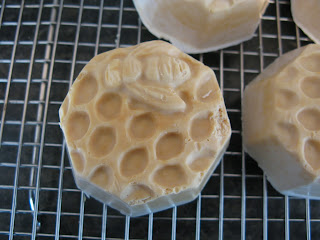 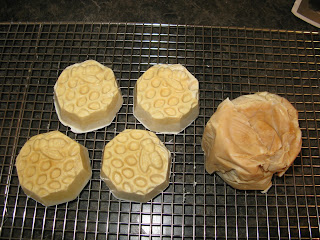 As many of you know, I have never made CP soap before. I was scared to because of the kids, Sam especially (3 years old), she likes to get involved in everything. I needed to wait until she was old enough to understand to stay AWAY from anything to do with Lye. We finally hit that milestone, she understands Lye is BADDDD and will let me handle it and keep away.

Now being a supplier of soap making ingredients and equipment, I have always felt silly giving people advice on a topic I know quite a bit about, however I have never actually experienced it. I relate it to that of a surgeon who knows the ins and outs of surgery, can tell you exactly how to do it or what not to do and the consequences of certain actions, yet he/she never actually performed surgery.

So tonight was the night. The girls were downstairs watching a movie now that we have a toy room for them. Logan was sleep... time to make soap!

Now I admit, I bought a kit. I figured for the first time, it would probably be a good idea. At least I know the recipe works and I could fully see the trace and go through the stages without wondering if my recipe was right if something did go wrong.

The recipe is a 1 pound beeswax CP soap recipe. The instructions say it will take 20-25 minutes to trace with a stick blender. Thankfully, I had spoke to a friend of mine, well seasoned in soap making, prior to going through the motions and she had mentioned it probably would take closer to 5 minutes.

So, I have my lye water cooled and ready, my soaping oils warm and ready, it's time to put them together and make soap... the real deal. I slowly drizzle my lye solution into the oil as the directions state and hand stir at the beginning to incorporate the two mixtures thoroughly. Then I turn on my stick blender on low and beat the soap batter for about 30 seconds, turn it off and stir with the stick blender shut off for another 30 seconds or so. It then comes to my attention that the Tupperware container I had planned on using as a mold was not big enough. I yell to my hubby to PLEASSSEEE go downstairs and find the soap molds on my top shelf and bring one up. He asks which one (I have 300 molds)? I say whichever... don't care ANYTHING!

Another 45 seconds or so has gone by and I am still alternating with the blender and by hand. The next thing I know I am yelling for him to HUUUURRRYYYYY! The batter is starting to trace and quickly! I turn off the stick blender and start hand stirring while giving him militant directions on prepping the mold! By total luck I had Calendula oil sitting next to me that had just been pressed. I told him, grease it with THAT! No sooner had he finished when the soap had to be poured, it was pretty darn thick.

I got the soap batter poured into the molds and then I noticed... by total luck (hubby didn't know what kind of soap I was making) he had brought my Bee and Honeycomb Milky Way Mold up. It may look good after all.

The soap is now sitting in the oven (to keep away from children and everything else) wrapped in a towel until tomorrow when I will take a peek and hopefully be able to unmold it. The leftover that I did end up pouring into the Tupperware container is going to be very ugly... my liner moved and it is a big mess. I figure I might be able to carve it into a flower or something as the creases will make lovely petals (not really, but that is how my mind works). It doesn't matter anyway, this was batch #1 and the purpose was merely to experience the process. If it's not pretty, so be it. I have a funny feeling I will have many batches to get all that right as I have already been bitten by the bug and have come up with about 20 different ideas on what I can do in the past hour.

I see it all the time... the bug that is. The glint in the eye of the person who got that first successful trace. I never in a million years figured I would get the glint too. This happened less than an hour ago and as I sat on the living room chair after it was all said and done telling my hubby about a coffee soap idea I have, my hubby looks at me and says "It has happened to you now too." And he grins. Sadly, he is right. I doubt I will ever be the same.

ETA: Pics added (soap out of mold) I'll update with pics after the cure.
Posted by Randi Carr at 9:09 PM

Looking for a product? Check out these Websites!